The News-Gazette and the Community Foundation of Randolph County continue their celebration of local heroes who have made an impact on the community or have gone above and beyond expectations to serve others. This effort is the result of a community foundation program that helps recognize such people while also raising money to help others.

“We thought a really neat things would be to create a list of Randolph County Heroes,” said Community Foundation board member Cathy Stephen Miller of the ongoing program which started in 2015. “For $1,000, anyone can nominate a person (living or deceased), organization, business, or community organization for the designation as a Randolph County Hero. The money goes into our unrestricted fund, which the board uses to do great things for Randolph County. It all has to do with making Randolph County a great place to live.”

People who are designated as Randolph County Heroes will have a plaque in their honor at the foundation office, will receive a certificate, and will be featured in the News-Gazette.

The newest Randolph County Heroes are Orville and Marjorie Kiser. They were nominated by their children, Gary Kiser and Beverly Kiser Manning. Their story is below. 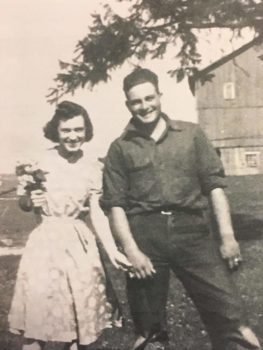 We consider our parents, Orville and Marjorie Kiser, Randolph County Heroes because they created a business that became the social hub of the community surrounding Deerfield, Indiana. This business, The Kiser Roller Skating Rink, was established in 1948 and continued until 1975.

Both Orville and Marjorie were born in 1919. Orville was born at home to a farm family at the old stone quarry between Deerfield and Ridgeville. Marjorie was born into a large farm family at the family farm in Albany. For both Orville and Marjorie, farming the family farm was always an important part of their lives. They both grew up during the Great Depression and their lives were guided by the frugality those times required. They also were guided by farm life where they grew all their own food and had most things they needed on the farm.

Orville Kiser was a man of many talents and vocations. He was a man who could make almost anything. He could create and design farm machinery. In a time when none were available, he invented a hay chopper that picked up cut hay and blew it into a wagon for feed. He developed drags to be pulled behind discs to prepare fields for planting. He also received a patent for a gravity bed that could be used in the bed of a pickup truck.

Orville would consider a problem and then find a solution to that problem. Orville had previously designed and built a beautiful round chicken house without supports in the center. This work of art remained on the farm for many years until being torn down in 2017. It added flare to the barnyard. The round chicken house was Orville’s inspiration when he decided to build a Quonset style building with a rounded roof that would house his newest venture, a skating rink. Orville was told that a rounded roof wouldn’t stand up to Indiana’s winter weather. The result is that 70 years after construction, the building still stands in Deerfield.

As a young man, Orville enjoyed skating, which is probably what prompted his dream of opening a skating rink. The dream of owning is own business began when he was able to purchase land from his grandmother, Dora Collins. The tract of land was along Highway 27 in Deerfield, Indiana, adjacent to Deerfield United Methodist Church. Some parishioners were unhappy with the thought of having a skating rink beside their church. They feared the rowdiness that would come from people at the skating rink. However, they were unable to discourage Orville from following his dream. He assured the congregation that he would run a tight ship and that inappropriate behaviors would not be tolerated at his rink. Anyone who came into the rink and caused trouble would quickly be escorted to the door. Orville expected kids to do what he asked of them and they respected his authority. That included his two children, Beverly and Gary. They always knew where they stood with their father. After convincing the Methodist Church congregation what an asset the rink would be for the Deerfield community, construction began. With the help of his father, Ervin Kiser, his brother, Duane Kiser, and the now convinced Methodist Sunday School Class, construction on the rink began in 1946.

Following a successful opening in 1948, The Kiser Skating Rink brought joy to adults and children from near and far. Orville enjoyed the people who came to the rink. He cared for and about them. On many an evening, following the closure of the rink, Orville would wait until each person had a ride home. The love of his life, Marge, was a gentle, shy lady with a beautiful smile. She adored the children and people who came to the rink. She sold tickets, pop, candy and secured peoples’ purses behind the counter. These activities kept her exceedingly busy all night long. Orville kept busy changing the records for the next skate including Waltzes, All Skates, Escorts, Conga Lines, Lady’s Choice and Foxtrots. The Kiser kids, Beverly and Gary, grew up at the rink. The rink allowed them to be a part of the crowd and meet kids from all over East Central Indiana. Beverly and Gary joined in the many fun activities at the rink and made friends with whom they still have contact.

Parents could leave their children at the Kiser Roller Rink and know with confidence that no harm would befall them. Orville and Marjorie would care for their children as if they were family. This also meant that the children were required to act in an appropriate manner befitting the Kiser family. There was no fighting and rude behaviors were not allowed. Kids were expected to behave themselves and have a good time. Orville would tolerate nothing less.

The Kisers have been stopped by people in the community who fondly remembered their many experiences at the skating rink. Many former skaters, now adults, took the time to stop and tell Orville and Marjorie thank you for their guidance. In many cases, this guidance changed the direction of their lives. Some of these people met their future spouses at the rink and others remember Orville’s strong, guiding hands that helped them develop character in their young lives.

Orville and Marjorie also hosted skating parties and holiday celebrations for their patrons. Some days were reserved for ladies only to skate. Schools, scouts, private parties and churches were encouraged to sell tickets and have skating parties to raise funds or have fellowship at the rink.

Holidays such as Halloween and New Year’s Eve were special at the Kiser’s rink. The Kisers would ask skaters to dress in masked costumes for Halloween and prizes were awarded to the best dressed skaters. On New Year’s Eve, the rink had a “double session”. This was a time when skaters could skate from 7pm to 10 pm with the second session beginning at 10 pm and continuing until 1 a.m. The rink was packed with excited skaters who waited in anticipation for Orville to hand out horns, confetti and noise makers. The final escort skate featured the traditional, Auld Lang Syne. The following day, the remains of confetti, decorations and various objects of celebration had to be swept and mopped. Candy and bottles of soda had to be restocked, and skates had to be inspected and placed back on the shelves for the next skating session. The evening was a tremendous amount of work for the Kisers but the feeling of satisfaction of a job well done was worth the effort.

Over the 27 years that Orville and Marjorie ran the skating rink many people were employed in various positions, including the Floor Manager. He watched for fallen skaters and speeders. His dreaded whistle would discourage the speedster to slow his skating to an appropriate rate. Another worker would help children to strap on skates, replace broken wheels, or put a few ball bearings into skate wheels.

The Kiser Skating Rink welcomed the senior citizens of the area to come in free of charge and sit in the bleachers to watch the skaters. The seniors would discuss farming, the weather, sports and gossip all while watching the skaters. The skating rink was a place to meet, greet and make friends that would last a lifetime.

Growing up, we were not aware of the hard work and sacrifices our parents made to keep the rink going. We were unaware of the bigger picture and the extent of their service to the community. We now appreciate the bigger picture. This includes the many lives Orville and Marjorie touched and influenced. One telling incident was when a young man stole a pack of cigarettes from the rink and stopped Orville years later to apologize for the theft. Other lives touched were the couples who met at the rink and were later married. Orville and Marjorie positively influenced a generation of people who came to the skating rink. One appreciates how the rink, by becoming a center of the community, added so much to the lives of so many.

If you listen carefully while driving through Deerfield, you may hear the 45’s being played, the cadence of the wheels spinning on the wooden floor, or hear the laughter of skaters sitting on the counter. And maybe, just maybe, if you are very quiet, you may hear the voice of Orville and Marjorie Kiser, Randolph County Heroes!