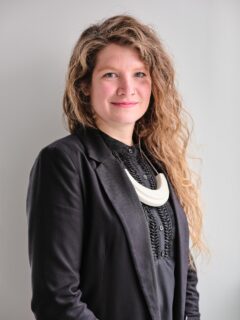 Braydee Euliss is an arts practitioner whose work in the field as an independent arts programmer, curator, and arts administrator is primarily informed by her formal visual arts training and experiences as a practicing artist. Born and raised in Muncie, her first professional foray into the visual arts was during a decade spent as a Framing Specialist and Gallery Manager for Gordy Fine Art and Framing Company. Committed to building opportunities for other local creatives and to the transformative potential of the arts to strengthen cities, she has championed her hometown through arts and culture work, including a large-scale mural project with the Mark III Taproom (the state’s oldest LGBTQ+ nightclub), Final Friday programming at the David Owsley Museum of Art to broaden engagement, and directing the Muncie Arts and Culture Council. Most recently, she led the team behind Indianapolis Contemporary, formerly the Indianapolis Museum of Contemporary Art, as its Executive Director. Braydee holds a Bachelor of Fine Arts in Sculpture from Ball State University.