The Community Foundation of Randolph County hosted a banquet Monday, September 30th to celebrate the top ten students in the Lilly Endowment Community Scholarship Program. Students, parents, and educators were invited to St. Joseph Catholic Church Parish Hall in Winchester for a catered meal. After dinner, CFRC Program Director, Stephanie Ward, introduced the students and gave them each an opportunity to introduce his or her parents and a favorite teacher. Students also shared their college and career plans. Executive Director, Lisa Jennings, presented each student with a certificate. 2012 Lilly Scholarship recipient, Mylie (Winger) Brennan, gave a speech about what the Lilly Scholarship has meant to her and offered advice for getting the most out of college. The top ten students are:  Brooke Bolton of Monroe Central (parents Melissa and Doug) Cole Campbell of Winchester (parents Kelly and Brent) Kate Hendrickson of Winchester (parents Amy  and Ben) Lindsey Herrera of Winchester (parents Tracy and Daniel) Leah Keesling of Randolph Southern (parents Lisa and Brad) Madeline Lawrence of Winchester (parents Amy and Gary) Heidi Livingston of Union City (parents Amanda and Darby) Katie Reichard of Union City (parents Shelia and Scott) Grant Wagner of Winchester (parents Janell and Brian) and Derick Williams of Union City (parents Georgiana and Erick) Students will find out on October 3rd if they have been selected for an interview with the foundation scholarship committee. Those interviews will take place at the Community Foundation on October 14, 2019. The committee will select one recipient and two alternates for the scholarship. Once the names have been submitted to Independent Colleges of Indiana  and approved, the foundation will announce the name of the recipient in early December at the recipient’s school. 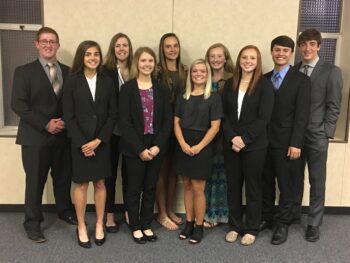